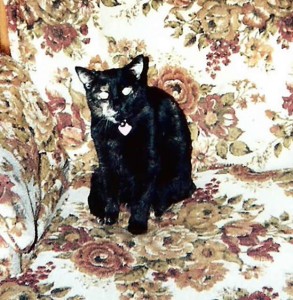 Pets come into our lives for many reasons. Jeeves and Cequinn, siblings, came into our lives at the same time. Their whole litter was picked up by a local Rescue Organization and brought to the veterinary facility where I was working. When they arrived the kittens were noticeably malnourished and sick. We lost one the first night they came in, and we were very concerned about the rest. Fortunately the other four kittens were survivors and wouldn’t give up. They stayed with us at the veterinary hospital from five weeks until twelve weeks. Boy were they spoiled when they eventually left!

Jeeves caught my eye, we only had one other cat in the house so we decided to bring him home on a Friday when they got the green light to be adopted. Saturday another kitten got adopted as a birthday present for a little boy who loved her very, very much. Monday when I came to work there were two kittens playing in the large cage in the waiting room, tempting adopters. Tuesday, still two kittens. Wednesday, still two. About an hour after I get home from work, there is a phone call from my friend and co-worker. She says, “Christina, we can’t just have this one lonely little kitty in here. Don’t you want to rescue her and give her a loving home? Can’t you take her?”

It took all of five minutes for me to cave (ok, less really but I’m telling this story), my husband and I went back to work and picked up the second kitten. So now I have Jeeves, black LH male, and Cequinn, Torti SH female. My thought was they would keep each other company, therefore stay out of some sorts of trouble. NOT!! What little mischief makers! Climbing curtains, jumping on the tables, digging litter all of the floor, “swimming” in their water bowls or the toilet, and trying to steal food off your plate while you’re trying to eat it. MONKEYS! Jeeves was more outgoing that dear little Cequinn. She became mine through and through. 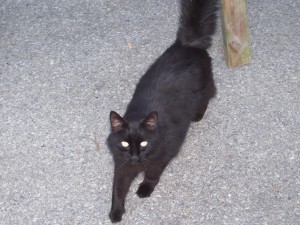 Jeeves, Cequinn’s litter brother who is still with us

Wherever I went, if she was inside, she wasn’t far behind. Room to room we would go. There was enough trust there, I could do anything to her and she allowed it. Was she happy about it? NO. She was a cat, they like things on their terms most of the time, but she was tolerant. Even after my oldest daughter was born, she was very good with a crawling infant “loving” her. Adults she didn’t find humorous. My husband still teases me that when I stand up from sitting, I’m starting a parade with all the animals following me.

Time went by like it does, but not enough in my book. Her brother turns fifteen in August, that’s our best guess anyway, but she left when she was only six. Liver failure claimed her well before I or my family was ready. She taught me that you need to enjoy the time you have and not take it for granted, you never know when you have to say goodbye. It’s not fair, it’s life. I am grateful to her, and always will be for the lessons and the love we shared. Trust is precious, don’t blow it.