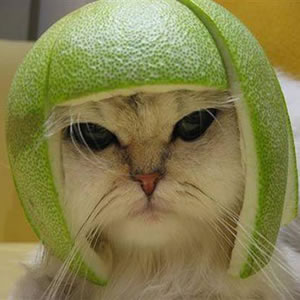 There is a parasite called Toxoplasma gondii that can live in a number of different mammals, but must carry out its reproductive cycle inside a cat gut. In order to spread from cat to cat the bacteria uses a strategy of infecting and editing rodent brains by their contact with cat feces. Since rodents eat and trample on cat feces, T-Gondii infects them. Once inside a rodent the bacteria finds and travels through the nervous system into the brain where it edits the smell, fear and sexual centers of the rodents brain so they’re not only not fearful of cats, they’re attracted to them. Once the rodent becomes a sort of toxo-zombie, it presents itself as a love interest to cat. The felines often respond to the romantic overture by taking it out to dinner, but not as a guest – as the main course. The T-gondii payload enters the cat with the rodent meal and spreads into the cat gut where it celebrates its victory with a baby making orgy. The toxo kids are then raised in the cat gut and when they graduate, the next generation is sent outward on poopy busses to start the process over again.

In the case of humans, T-gondii has interesting and terrifying side effects. Pregnant mothers are warned not to handle litter boxes because T-gondii can seriously harm the fetus. Babies in the womb can develop deafness, mental retardation, and other difficulties. Adults are not immune to consequences from T-gondii either. Humans involved in horrible accidents involving reckless speed and motorcycles are 4 times more likely to be infected by T-gondii than the average population because of how it changes our physiology and personality. It is thought to change human tolerance for fear in a similar way. Schizophrenia is more likely in people infected with T-gondii… and we all know about cat ladies. T-gondii has also been implicated in changing culture and the course of history because of its effects on humans.

As it turns out we humans didn’t really invent farming or the domestication of animals. Parasites and other microbes edit our behaviors for their own purposes by various means for a very long time.

T-gondii has recently been linked to reduced memory and reading skills in school-aged children. Parasite in cats linked to learning difficulties in children – Telegraph

Here is some additional information on T-Gondii from PetMD about precautions involving Pregnancy and Cat Litter, Feces

Here is a research paper linking Toxoplasma gondii Seropositivity and Suicide rates in Women ( Seropositivity means you have or had T-Gondii in your system) http://www.ncbi.nlm.nih.gov/pmc/articles/PMC3128543/

Toxoplasma gondii Infection in the United States, 1999–2004, Decline from the Prior Decade http://www.ajtmh.org/content/77/3/405.short